The Fraying Palestinian Political Entity in the West Bank 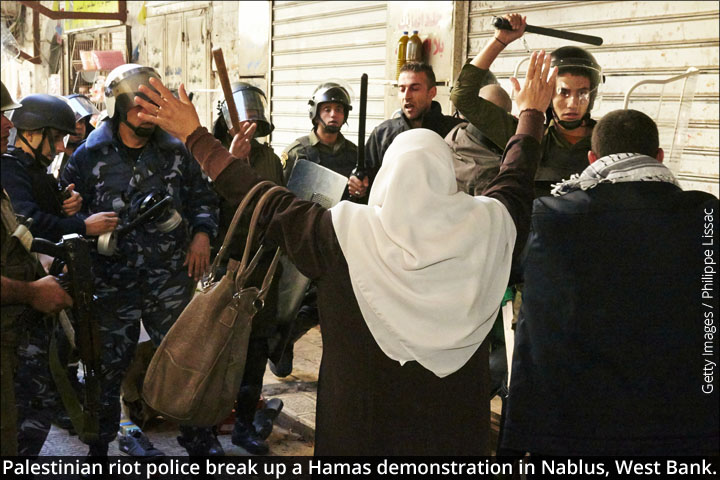 The Fragmented West Bank: The Whole Is Less than the Sum of Its Parts

The Palestinian Authority is failing to control extensive parts of the West Bank. As a result, some districts of the West Bank are developing in different directions, thereby accelerating the process of the PA’s disintegration.

In Hebron, for instance, the large clans of Mount Hebron have linked up with each other, reestablished the Tribal Council of Mount Hebron, and sent a delegation to Amman to express loyalty to the king of Jordan under the Jordanian flag.

In Ramallah, the PA’s de facto seat of government, Europe seeks to organize a phalanx of non-governmental organizations (NGOs) as a political force. This effort is opposed by the PA, which wants the NGOs to be under its own rule. It was because of this pressure that former PA Prime Minister Salam Fayyad resigned from the leadership of the key NGO Palestine of the Future.

Nablus, for its part, has gone into a tailspin of total anarchy. It is under the rule of gangs, with exchanges of gunfire in the heart of the city and attempts at political assassinations.

Ramallah’s loss of control over the West Bank districts raises questions about its ability to run a state and play its part in ensuring not only Israel’s and Jordan’s security, as required by various agreements and the rules of conduct between neighboring states, but even its own security.

The tearing of the Palestinian political and social fabric will only increase as Palestinian Authority President Mahmoud Abbas nears the end of his tenure.

The fragmented Palestinian West Bank will be a weaker entity than the weak states that collapsed in the Arab Spring. When the Palestinian entity collapses, the vacuum will be filled by the negative forces that have become the nightmare of the world.

Pinhas Inbari is a veteran Arab affairs correspondent who formerly reported for Israel Radio and Al Hamishmar newspaper, and currently serves as an analyst for the Jerusalem Center for Public Affairs.
Follow @inbarip
View all posts by Pinhas Inbari
Contents