The “Al-Aksa Is in Danger” Libel:
The History of a Lie 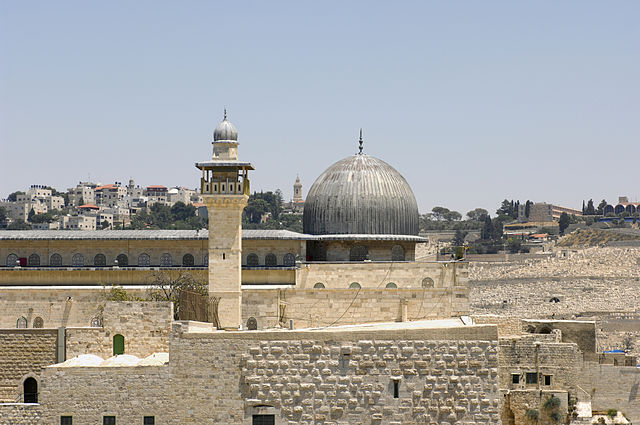 Palestinians often hear from their leaders that a Muslim holy site in Jerusalem, al-Aksa mosque, is in danger of collapse – and the Jews are to blame. Whether printed in cartoons, preached in mosques or taught in schools, the lie is accepted as common knowledge across the Arab world. Millions of Muslims accept it as truth. The message is clear: Jews seek to expel the Arabs from Jerusalem.

This lie is nothing new. For the past century, Palestinian leaders have told the “Al-Aksa is in danger” lie in order to incite their people to attack Jews. It is important to expose and counter this fabrication because it remains a spark that can lead to bloodshed.

Nadav Shragai, a veteran journalist and Jerusalem expert, has written the authoritative study on the history of the lie. His work is presented on this site, chapter by chapter. It is also available in PDF or ebook format.

Below are five facts that you should know about al-Aksa:

1. Political cartoons in major newspapers throughout the Arab world accuse Israel of seeking to undermine and destroy the Dome of the Rock and al-Aksa Mosque.

2. In fact, Muslim construction in an area under the mosques, known as Solomon’s Stables, endangers the foundation and destroys archaeological treasures.

Left: In 1999, Muslim religious authorities converted Solomon’s Stables into a mosque. An enormous pit dug in the soil of the Temple Mount caused irreversible archaeological damage. (courtesy of Dan Bahat) Right: Part of the soil containing archaeological findings that the Muslim religious authority removed from the large excavation at Solomon’s Stables. (courtesy of the City of David, Ancient Jerusalem archive)

3. For the past century, Palestinian leaders have denied the existence of a Jewish Temple in Jerusalem and accused Israel of planning attacks on the mosques.

Left to right: The mufti, Haj Amin al-Husseini, father of the “Al-Aksa is in danger” libel (Wiki Commons); Yasser Arafat denied the existence of a Jewish Temple on the Temple Mount (AP); Sheikh Reid Salah, a leading Israeli Islamist, promised to redeem Al-Aksa “in fire and blood.”

4. The archaeological digs that Israel has conducted over the years near the Temple Mount, far from the mosques, are a laudable scientific and cultural endeavor.

5. Since liberating Jerusalem in 1967 from Jordanian occupation, Israel has protected religious sites of all faiths and ensured freedom of worship for all peoples.

Demography, Geopolitics,
and the Future of Israel’s
Capital
Jerusalem: The Dangers
of Division
Understanding Israeli
Interests in the
E1 Area
Other Publications
by Nadav Shragai